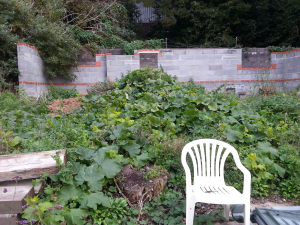 Renovating a run down 1930s three bed end terrace property has involved a large stake from me, my time, effort and money. How did I improve my odds of success? Three things where attractive about the property, location, land and condition.

Location. A cul de sac location was chosen because kids can ride bikes and play without busy traffic. Also traffic noise is not a problem. A Location within the inner bus zone for the city had merit because fares are cheaper and commuting times are reduced. Being 20 minutes away from the central business district would serve commuters well.

Located close to a cycle path that was converted from a disused railway line by the Sustrans Cycling charity it provides another option for getting to the city centre or travelling out of town for leisure.

Lastly there is a large well managed park nearby which is excellent for children and people looking to enjoy open space, trees, tennis, skateboarding and more.

Schools and nurseries within walking distance where also a consideration.

These are not an exhaustive list of attributes that make a good investment in property, but, should help with forming your own list depending on personal circumstances.

Condition: outside the property existed potential to make relatively simple changes to add value. Inappropriate masonry had been used making a boundary wall and flower beds at the front of the property consisting of a design where rectangles where laid at right angles to one another. The garden was laid to lawn with a wild part at the end which had drainage problems.

As an amateur property renovator I decided to set myself a brief which used the following factors to guide my thought process. Unfortunately my creative inclinations where severely clipped by one overriding consideration. Let’s keep it real, it was cost. Second most important was to reduce the waste produced where possible and to reuse as many materials as possible working with the existing design to the outside and inside of the property. The remainder of this post will focus on one element of the property renovation.

Natural stone walling products are attractive visually and can give a excellent heritage look to a property. Most properties in the 1930’s UK where built using red brick. Red brick in this case was used for the front boundary wall between the houses. The previous owner decided to use a sandstone style concrete block to make a low front boundary wall facing the street.

Inside the house the same block had been used round the fire place to make cupboards, to make a cloak room, and round a supporting pier. Interior design seemed to have been inspired by North African influences. Including use of this sandstone style block, mahogany, open plan living area with arches coming from a central pier. Sandstone looked totally out out of place outside, not to mention in the living room.

After chatting with a brick layer he mentioned the block is called Bradstone made by a manufacturer with the same name. Blocks come in various sizes and mimic the appearance of stone.

Taking a bet on the quantity of blocks I decided to remove all the blocks from the front and inside of the property. Due to the natural stone appearance and various sizes they worked perfectly as part of a project to landscape the garden.

As the garden is on a gradual slope there where already two terraces present using wooden sleepers. Under the sleepers was an existing concrete base. Part of the landscape design for the garden was to make two terraces. Using Bradstone for the terrace walls has given a great natural appearance and using the existing footings saved time and materials.

Dimensions of the terraces where estimated and quantity of block required surveyed. As it happened there where exactly the right amount of blocks for the wall. In fact the brick layer said there where just two left over.

Furthermore, the blocks removed from the front of the property opened up the width of the drive and the new wall design incorporated a larger opening allowing space for three cars.

Want some cash for a project? Check out the Let’s Compare Bet.com featured review. Take me to the review.